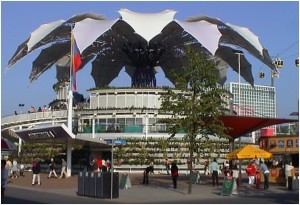 Britain was the most industrially advanced nation on earth for centuries. This was reflected in its early infrastructure: railways, for example, were extensive, efficient and punctuated with magnificent stations. It is fair to say that, in common with many developed countries, we have latterly neglected parts of our infrastructure, and many of our public facilities need regeneration. This has been the subject of partisan debate, but the reality is much simpler: large projects are expensive, and funding from the taxpayer and private interests is necessarily limited. There have nonetheless been several notable infrastructure projects completed in in recent years, with a common factor among these being that traditional design and architectural solutions have been dramatically refined. For example, there has been a proliferation of bespoke tensile fabric structures, including the magnificent New Street Station. Could these be the way forward?

The obvious advantage of these structures is that the tensile membranes can cover large, irregularly shaped areas with minimal additional structural support, meaning the installation is relatively inexpensive – an attractive feature in times of public and private sector austerity. Similarly, the execution of these projects is quick, meaning that new or renovated sites can be operational and productive with little commercial or functional downtime. On a related point, tensile fabric structures tend to need less ongoing maintenance, further reducing costs and labour.

The flexibility of the membranes also gives designers and architects considerable latitude for creativity and imagination, allowing for the possibility of some genuinely innovative and iconic structures even with restricted resources and in otherwise unpromising circumstances.

While mixed reactions are inevitable when a new structure is unveiled to the public, the response to such developments as New Street Station has been overwhelmingly positive. The intelligent and sensitive renovation of a famously bland old station has garnered praise from many quarters, and the speed of the project’s completion has been highlighted by the Chancellor of the Exchequer, who was delighted with how quickly the new piece of infrastructure was operational and contributing to Birmingham’s prosperity. Further examples of major projects can be found at http://fabricarchitecture.com.

Bespoke tensile fabric structures alone are not the answer to all of Britain’s infrastructure problems, but they do represent a cost-effective and creative solution which will surely be increasingly adopted in years to come.